I have just returned from a fantastic week of walking and collecting on the stunning North Cornwall coast... in a heatwave...seafog... and gales.... 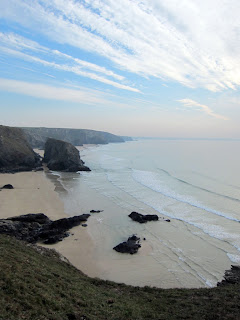 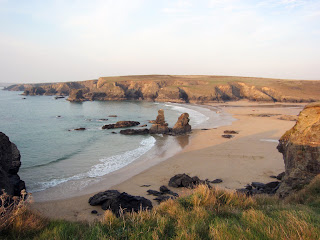 Beaches there seem much cleaner than here in Suffolk - though after three days of gales from the west, this can all change as the transatlantic plastic rolls in...

However, even in mild weather, the tideline at some beaches was a shock to see: thousands of nurdles and tiny plastic pieces as far as you can see...


Many of these plastic pieces are nurdles - small resin discs which are the raw material for the manufacture of plastics. As a result of spills, these are found on beaches throughout the world.

Jane Darke (Wrecking Season film-maker and artist) and I went collecting at Watergate Bay to harvest nurdles to show to children in schools.

If you haven't been nurdling before, here's how you do it:
Scoop up the plastics at the high tide line with a sieve or colander, shaking to remove as much sand as possible. 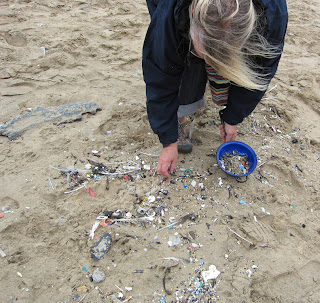 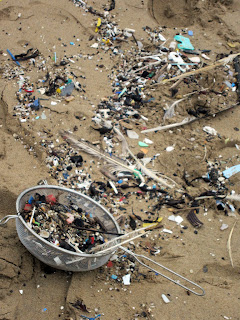 Tip into basins of water to allow the sand to drop to the bottom. Remove plastics with sieve and lay out on trays to dry.

When dry, pick through to sort out nurdles from the rest of the debris. We also sorted our debris into polystyrene pieces (there were lots), other plastic pieces (there were even more) and natural debris (wood, seaweed, feathers).
WARNING: this takes hours and is best done over a beer!!

Finally a bowl of nurdles emerged... We counted a sample and weighed what we had picked out and - incredibly -  the small soup bowl held in excess of 9000 nurdles!!! And these were collected from just a few metres of shoreline at the top of Watergate Bay.

Nurdles are a pervasive pollutant found in billions on beaches all over the world and are major concern not just because of they are often ingested by seabirds and other marine wildlife but also because the resin pellets accumulate dangerous organic pollutants such as PCBs and organochlorine pesticides which can work their way into the foodchain.

For more about nurdles, follow this link. And if you have lots of nurdles on a beach near you, why not follow our beginner's guide to nurdling and take part in Dr. Hideshige Takada's global survey of pollutants in nurdles at Tokyo University of Agriculture and Technology.  Here are Dr Takada's results so far - it's sobering reading...

flyintheface:blog is the blog of Suffolk artist/collector/campaigner Fran Crowe: playful, but deadly serious...
To see more of Fran's work visit www.flyintheface.com
or www.museumofbeyond.org.